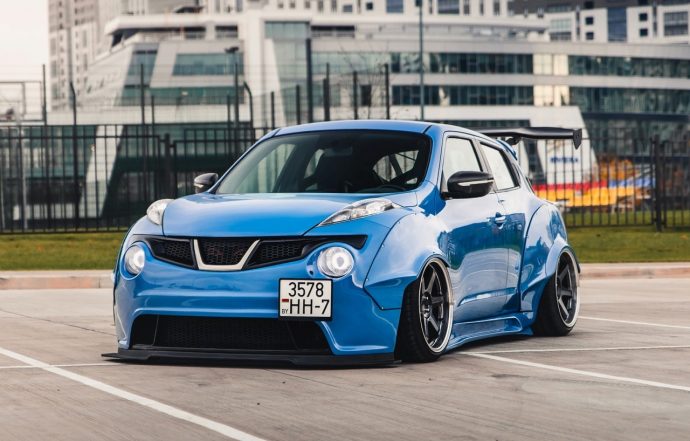 Nissan Juke has front-end exterior close to Jeep Cherokee. Both are strange. Jeep already become a little better, Nissan still finds a consumers with specific taste 🙂 But if we are talking about cars from tuning side – strange cars are even more interesting for tuning.

It’s easy enough to increase oddities. On a weird car even most odd body kit can look harmonically. And bodykit is only one you can do with your car.

To make your odd car more absurd you can build in with cambergang wheels. With huge wing on rear end, and it doesn’t care that it’s a compact SUV, not some sedan or coupe. SUV!

I may to say that this one Nissan Juke has some interesting, unusual and stylish mods. At first you must look on air equipment in really compact trunk. You may don’t know and have no associations. But air receivers are made in style can of beer 🙂

It’s a simple idea – to paint air reservoirs of your air suspension as a favorite beer. But I guess even Richard Rowlings from Gas Monkey didn’t do so! But, as all we know, he really loves beer 🙂 Richard, if you read this – it’s already not unique idea, but still cool!

But even so creative boot with airlift equipment is not all. There are else a few features on this small SUV. Wide body kit makes Juke almost quadrate 🙂 Looks absurd, here everything is so, beginning from the car.

Rear end is not simple and stock too. 4 exhaust tubes means power! From 1.6 liter and it would be awesome if here is it’s turbo version. At least looks great!

But let’s be honest – if I would not write about exhaust tips you even will not see them! And it’s really hard or almost impossible to watch them when here is this huge wing! And wing is really huge. If this wing were installed on some Chevy Tahoe – it would not look small there, so big it is.

I don’t think that this wing gives some real benefit, but as on of absurd components on odd Nissan – this one wing is in a right place! 😉